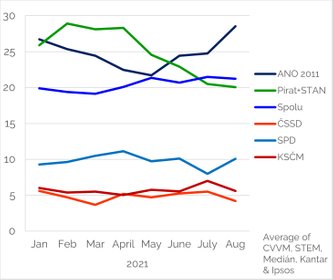 In spring it looked as if prime minister Babiš' party ANO would lose the October election, but by the end of August it was clearly ahead of its two rivals, the electoral alliances Spolu (ODS, TOP 09, KDU-ČSL) and Pirates+Mayors and Independents (STAN).

Following a vote in the parliamentary group of the European People's Party (EPP) in the European Parliament on new rules to allow for exclusion of members, Fidesz has quit EPP. 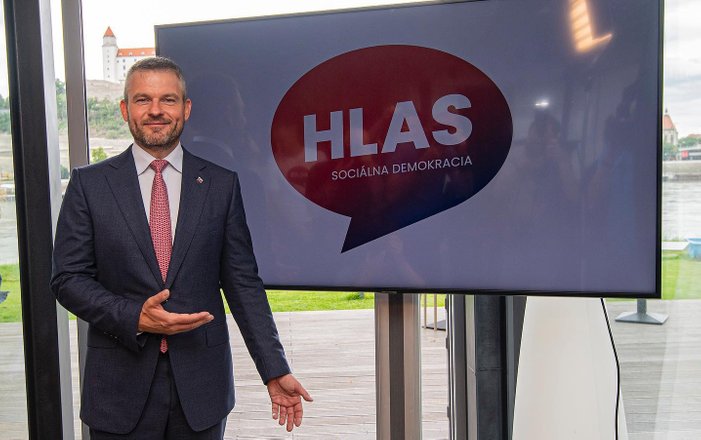 On 29 June, former prime minister Peter Pellegrini announced his new party Voice - Social Democracy. Pellegrini and ten other newly elected members of parliament left Direction - Social Democrats (Smer-SD) earlier in June. They are collecting signatures to have the party registered over the summer. According to the party law 10,000 signatures are needed. Pellegrini was a member of Smer since 2000 (i.e. almost since the beginning), and served as an MP for the party since 2006. He became prime minister in 2018, after the demonstrations in the wake of the murder of Ján Kuciak and his fiancée forced Robert Fico to resign.

The polling bureau Focus showed Pellegrini's new party at 19 percent in June 2020 - before the party even had a name. Together the old and new social democrats get almost 30 percent.

Hungarian parties in Slovakia to merge

This weekend's party conferences in Most–Híd (Bridge) and Party of the Hungarian Community (SMK-MKP) formally confirmed their agreement to merge. The merger was announced on 23 March, 2021, and is now one step closer to realization. The new ethnic Hungarian party will be called Aliancia – Szövetség (alliance in Slovak and Hungarian).

Most–Híd was founded in 2009 by former SMK-MKP chairman Béla Bugár and his circle (MPs elected for SMK-MKP), which caused the mother party to fall below the threshold in 2010. Most–Híd won representation in 2010, 2012, and 2016, but failed in 2020 after having governed with Smer - Social Democrats and the Slovak National Party (SNS). The third party in the planned merger, Összefogás-Spolupatričnosť (team-work in Hungarian and Slovak) was founded in 2019 by former SMK–MKP elites but never crossed the threshold.

The merger is expected to make it easier for the Hungarian minority to cross the electoral threshold in the 2024 election.